One core theme of my research is how delta systems modify and influence river fluxes. These fluxes are the connection between upstream terrestrial environments and the coastal ocean. Anthropogenic activities in upstream watersheds, such as agriculture and fertilizer application, urban developments, and water management systems like dams and treatment facilities, all have impacts on the river network. Coastal delta wetlands provide a suite of ecosystem services that can reduce the impact of upstream systems on the coastal ocean, and help reduce flood risk to coastal communities. Identifing how these systems and processes are changing is crucial for maintaining sustainable coastal communities and limiting flood risk.

I use the ROMS ocean model, typically as part of the COAWST coupled ocean, wave, sediment modeling system. I also develop and use the WBMplus water balance and river network model to simulate river fluxes. In most model applications, I loosely-couple these two models by processing WBMplus output into ROMS input files. The lack of two-way model communication is not a problem as information flows are directed from the river network to the ocean.

An example of this work is shown below of a model application off the coast of the Mekong River Delta. Simulated surface sediment concentration is compared with surface particulate matter from MERIS. 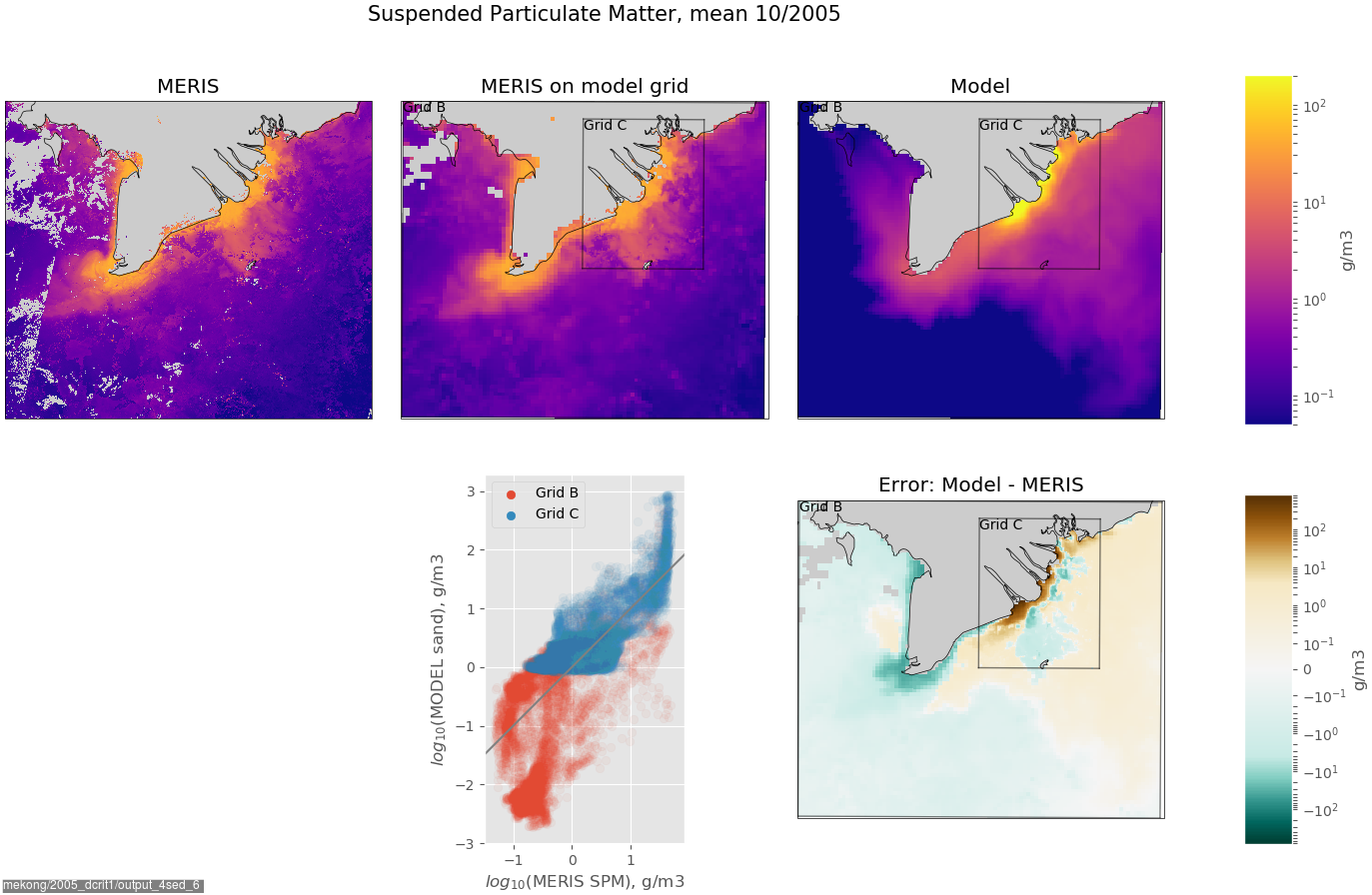 I study the risk faced by cities and communities on river deltas due to global and local environmental change, and how it changes at a range of spatial scales. This research depends on novel use and integration of global and regional datasets. I combine GIS, remote sensing, and numerical modeling to better understand the interaction of different components of the river delta systems. At the global scale, I have utilized contrasting delta systems as natural experiments. These comparative studies have relied on empirical, GIS-based methods, global remote sensing data, and global hydrological modeling. At the local, delta-specific scale, my work on perturbations to sediment delivery and deposition has utilized coupled ocean dynamics, waves, and sediment transport models.

Deltas are home to nearly half a billion people globally. Another 3.5 billion, about half the world's population, live in watersheds upstream of major deltas. Human perturbations to natural hydrological and deltaic systems puts people at increased risk of flooding. One focus of this work is to quantify and compare these risks.

Recent findings highlight several long-term implications for sustainable development of deltas. The capability for wealthy and developing nations to reduce the overall risk to their deltas through risk-reducing defensive investments is not guaranteed into the future. The cost-effectiveness of these defenses is reduced both by increasing energy costs, as well as increasing sea levels. Both trends increase the overall cost for a given level of coastal protection. We utilize decade-to-century economic trend forecasts to estimate the varying impact on delta risk across each delta system. Certain delta systems, in particular the Mississippi (USA), the Rhine (the Netherlands), the Yangtze (China), and the Chao Phraya (Thailand), are more sensitive to changes in economic-trends given their underlying geophysical and environmental characteristics. Efforts to address the root causes of land subsidence in the near-term are critical for long-term sustainability. 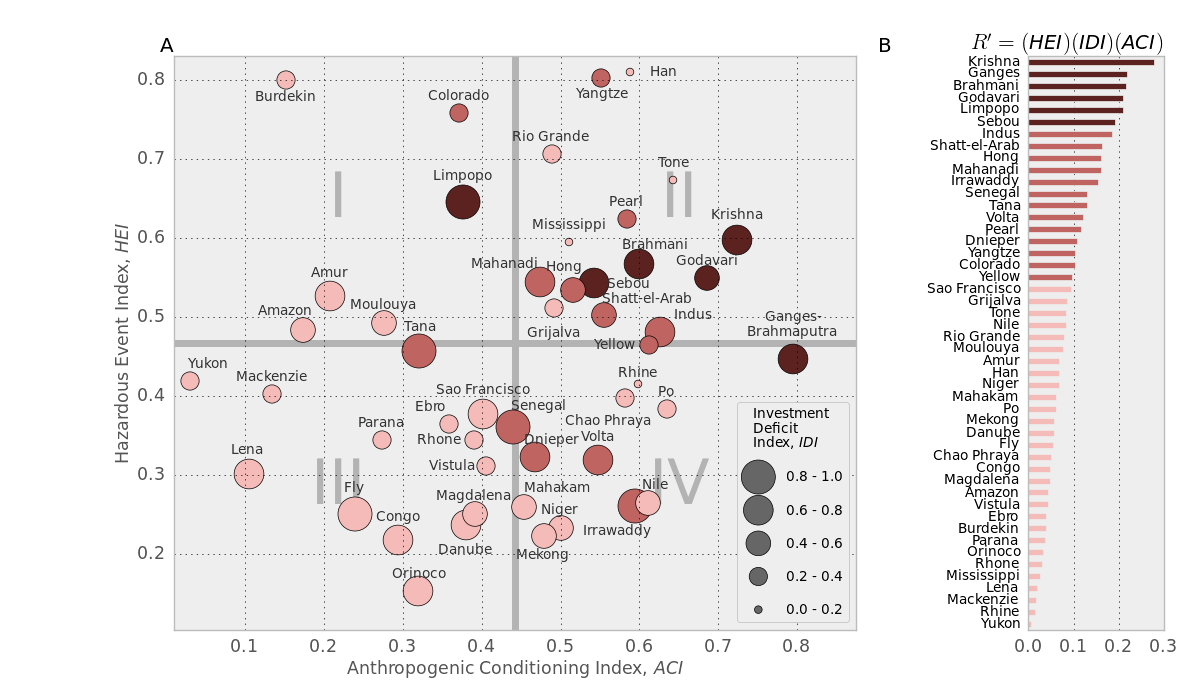 My dissertation work was on flow dynamics in a number of straits in the Philippine Seas, as part of the PhilEx program. 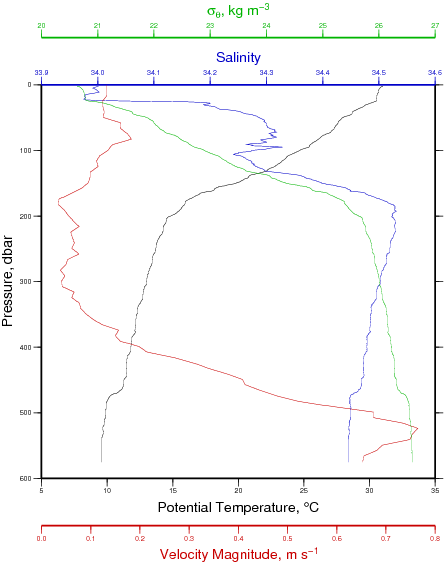 Consisting of thousands of islands, the Philippines presents very interesting oceanographic problems, as much of the important physics are at small geographic scales and poorly handled by full ocean models. The influence of the Asian Monsoon and El Nino complicate the picture on annual and decadal time scales as well.

Using in situ observations, including CTD, LADCP, and moored ADCP data, we have worked to estimate the flow through Panay Strait, into the Sulu Sea, an interior basin. Estimates based on hydraulic control theory are in good agreement with direct observation of the flow. I also investigated the mixing dynamics that modify the water composition within the strait and set the resulting downstream Sulu Sea composition.